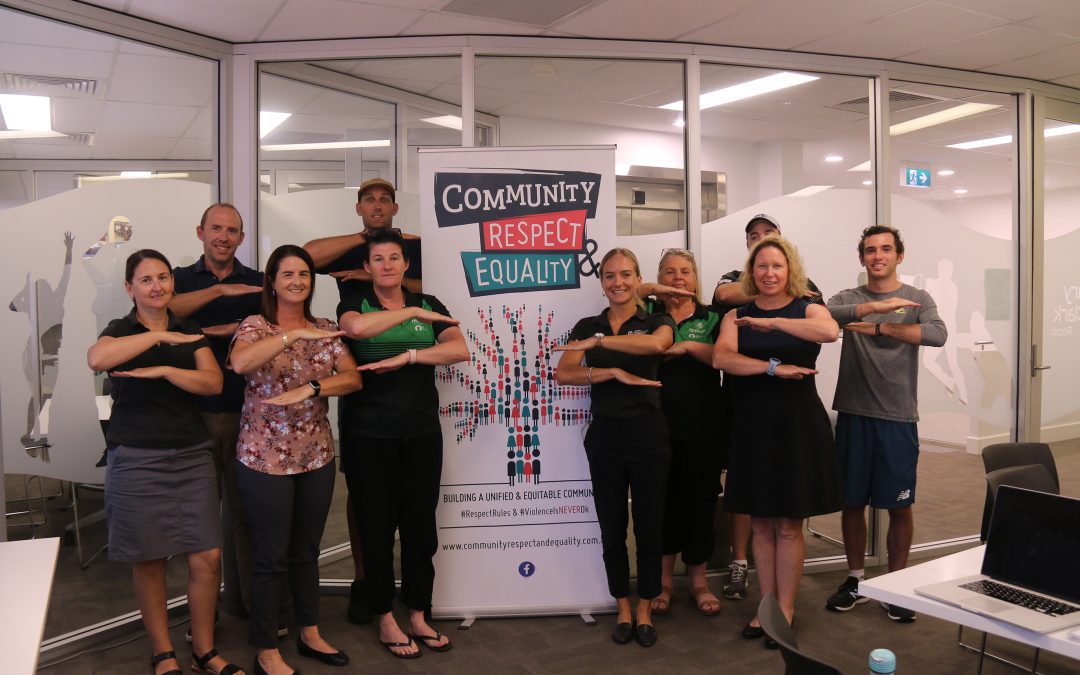 The WA Centre for Rural Health has launched the Speaking out against disrespect training package to build individual’s skills and confidence to speak up about sexist and disrespectful behaviour in the workplace and community contexts.

The training has been developed as part of the Community Respect and Equality Strategic Action Plan (CRE) to prevent family violence in Geraldton. Local organisations including the City of Greater Geraldton, Mid West Ports Authority and the Department of Local Government Sport and Cultural Industries have been involved in Community, Respect and Equality for several years and have provided input into the Healthway-funded training package.

Associate Professor Monica Moran of the WA Centre for Rural Health said ‘We know that violence against women and family violence are complex social issues linked to gender equality and disrespect in the community as a whole. We also know that around 80% of Australians want to challenge disrespect when they see it but don’t know how to. We designed this training to give people the skills and confidence to safely challenge sexist, disrespectful or demeaning comments in their workplace and community.’

The training works towards strengthening organisational cultures that contribute to safe and respectful communities. When workplaces and community organisations actively model respect and equality they set the tone of what is acceptable in the broader community.

The Department of Local Government, Sport and Cultural Industries delivered Speaking out against disrespect to staff from six local sporting organisations including Great Northern Football League (GNFL), Football West and Netball WA on Friday 12 March. Regional Officer of the Mid West office, Simon Barras said “Sport plays such a big role in people’s lives. Clubs and leagues have a responsibility to provide safe and respectful environments for members and spectators and to role model the standard of behaviour that we want to see in the community. By delivering Speaking out against disrespect we are not only providing people with skills to call out sexist jokes and comments, we are sending a very clear message that the Geraldton sporting community does not tolerate sexism and disrespect of women.”

The City of Greater Geraldton is also working towards rolling out the training. City CEO Ross McKim said “The City feels strongly that it should lead by example in promoting a culture of equality, respect and non-violence to the community. We have been actively involved in the development of Speaking out against disrespect and will begin rolling it out to staff in coming weeks.”

The Mid West Port Authority is also keenly aware of the responsibility that employers have to ensure their workplace culture sets a standard for the community. Chief Executive Officer, Dr Rochelle Macdonald said “The way we talk to and act towards our colleagues, partners, friends and family matters. By delivering Speaking out against disrespect to all staff and contractors through our induction process we are sending a very clear message that sexism and other forms of disrespect are not tolerated at Mid West Ports and should not be accepted in the community.”

Speaking Out Against Disrespect is part of the Healthway funded Conversations for Change: Accelerating efforts of prevent family violence research project at the WA Centre for Rural Health and is available online at https://lms.wacrh.uwa.edu.au

If you would like to find out how your organisation can start actively working towards preventing violence against women and family violence contact the WA Centre for Rural Health on 9956 0200.